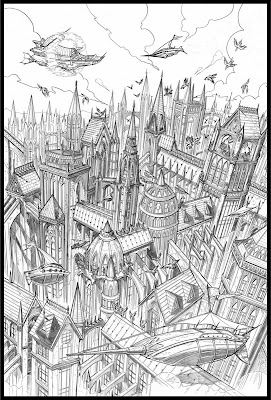 We know in detail -- if we're at all paying attention, that is -- about the magic and enchanting capabilities our game systems allow. The game companies which publish those systems are usually eager to sell us game settings.  These generally provide a good picture of how many mages of what degree of power live in those lands, by way of depicting key NPCs, from the Royal Sorceress to the fussy old enchanter puttering around his dingy shop on the corner.

And time and time again, in setting after setting and system after system, GMs and players alike badly overestimate the amount of magic available to make life as rich and wonderful as necessary for the PCs to get anything they want on demand, without having to wait for it, and to not have the daylights taxed out of themselves to boot.

I've read a lot of D&D campaign settings. I've seen Greyhawk and Lankhmar, Al-Qadim and Blackmoor and Dragonlance and Forgotten Realms and the D&D version of Rokugan and NOwhere (with the sole exceptions of the somewhat ephemeral settings of Eberron and Spelljammer), do you find these vast world changes. The cities, for the most part, look like any old pseudo-medieval fantasy city; the rural areas have farms and villages and things like any old pseudo-medieval fantasy fief. The shops depicted in these supplements don't have magical boxes where you insert a few gold and POP! WHIZ! a sword pops out; they have smithies where armorers pound them out on anvils. The farmers don't sit back and watch the priestess of the Earth Goddess de jour witch up some crops; they are depicted as sowing, growing and reaping in a fashion a 12th century Burgundian villein would recognize. The fantasy cities aren't fed by hordes of clerics casting Create Food or Goodberry; they're depicted with bakeries and butchers and grocers and stalls in open markets, all operating in a nice low-tech mundane way. People drink from fountains and wells, not from Decanters of Endless Whatever.

Many of the armchair fantasy economic theorists blithely presume a unique degree of efficiency in their gameworlds. Because there are X number of wizards in town of a high enough level to enchant Create Water items, of course the city has pure fresh water in ample quantities. Because there are enough clerics of Y level, of course there's free healing for all and enough food to cover. Because there's Z number of gold coins coming in, the city can afford to have magical streetlights and airships and levitating elevators and all of that.

Beyond that, hang on here.  So you do have X number of wizards enchanting, and that’s enough to make sure the city has that pure fresh water?  Alright, so stipulated.  So who’s enchanting the magical street lights?  Who’s enchanting flying carpets?  Who’s enchanting the animated war machines?  (And who, out of curiosity, is creating the enchanted swords, armor, wands, elixirs and other widgets so beloved of PCs?)  That would be “no one.”  If I have $100 in my pocket, I get to take my wife out to a fancy dinner or I get to take her to a nice show or I get to take her to the Bruins’ game or I get to pick up four new hardcovers or I get to buy a couple new pairs of dress pants.  I can only do one of these, and I certainly don’t get to do them all.  The same principle applies with magic in a fantasy society.

Another crucial error of the armchair theorists is in assuming that everything always goes right. What, the chief enchanter never gets drunk and breaks her neck in a fall the week before the UberDingus is finished? No funds or materials ever get diverted by corruption ... or flat out stolen? The enchanters never find out a month in that what they thought were the fifty rubies needed as material components for that civic enchantment are in fact a bunch of doctored garnets?  (Or, alternately, that war the PCs were involved with in Altania has cut off the only bulk supply of rose korf feathers ... can you get by with substituting king korf feathers?  No?)  Gee, sorry, but that fire that torched a third of the Palestra District before the mages put it out got the Mill Pond Waterworks, and half the city's Create Water items were destroyed?  That stuffy king is peeved that HIS Bowls of Endless Food are only silver while he hears the Bowls over in Vallia are made of gold -- so he just commanded the wizards to make up a whole new set. And so on.

(Never mind that hello, die rolls?  How often do those spells work perfectly and automatically?  Seriously, folks, if the electricity in your home, your Internet connection, or starting your car failed as often as one time in twenty, you would be rioting along with everyone else.)

Then, there's the Who Has The Gold Makes The Rules precept.  Let's say there's a wizard in the city who can send long-range, one-way messages ... call it five times a day, for the sake of argument.  Cool!  Now the PCs can get word to Grand Master Bolan in Warwik City that they found the dingus, and the Master can stand down the alternate plans.  Not so fast.  They're in Seasteadholm, and that's the only wizard in the city capable of casting the spell.  That's an incredibly valuable spell: the baroness wants access to it to send messages to the capital and to her liege lord in the provincial seat, the regimental commander wants access to it to reply to his superiors, the commodore of the naval squadron wants to alert his counterpart in Shelaxin -- a hundred miles down the coast -- that he's chased the pirates in that direction, and every wealthy merchant magnate and compagnia in the city wants to order goods real-time, or alert the financial interests in the capital that the pearl fishers hit a rich new strike.  The odds are that each of those Magic Messenger uses are bought and paid for, long in advance, and the wizard isn't about to cough up Baroness Vydra's slot just because some ragamuffin adventurers (who are going to blow town day after tomorrow anyway) walk in demanding instant service.

(And finally, who says that the populace is down with it?  The oilsellers and charcoalers aren't going to protest ubiquitous Create Fire items?  Impoverished farmers aren't going to riot over the Create Food items?  "Hey, the midwives have been talking about all the stillborn babies coming out in houses next to magical light posts! The wizards are trying to sterilize us!!")

I have, whenever these economic discussions have come up over the last several years, asked the people who talk about the endless capacities of D&D player-characters why the writers, editors and creators of the D&D product lines don't seem to act as if they really do. I've yet to receive much of any answer at all, let alone a good one.

Lacking the same, I'll fall back on the only logical inference: it isn't depicted that way because it isn't that way.

Ravenswing
Amherst, MA, United States
Hello there; I'm Bob Traynor. I've been gaming since the 70s, when me and my high school friends Laurey and Marilyn went on a whirlwind 10-hours-a-day-three-straight-days run through the wild and intense world of the Empire of the Petal Throne. Since then I've played RPGs; GMed RPGs; run tournaments; been a convention speaker; written for SJ Games, Iron Crown, Gamelords and Mayfair; designed a homebrew; playtested RPGs; moderated the gaming tracks at Worldcons ... this is one of the enduring things I've done in my life. Over the years, I've had some strong opinions. Read this blog, and you'll have some of them inflicted upon you.