Picking Up The Wand / The Rainbow Sword

So here I am again.  It's been several years.  But I've been sitting on some things to say, and so therefore.  Without further ado ... 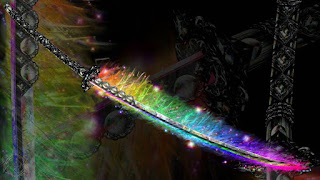 “So, my sisters.”  I gazed out the clerestory window at the tableau in Court Square, and I made no doubt my gaze was as stony as were the rest of the Conclave.  “I see what you see.  Is there truly any doubt?”

“None,” said Mother Arathena, with a bitter hiss.  “That jackal has the true Sword.  Captain Noran saw her hack through half the enemy cohort to reach the postern gate, and I know Noran to be a reliable man.  Not given to exaggeration.”  She swallowed hard, tearing her gaze away from the triumphant spectacle outside.  “But – but how?  How was It found, after so long?”

Mother Selanya tossed her head with a sneer – she seldom had use for Arathena, I knew.  “Lady’s Grace, who cares?  Dueled with dragons or bought it from a peddler, what boots it?  The question is this: what do we do?”  Her mouth was set; she didn’t know.  Neither did the others.

“ ... and in the sundering terror of that hour, the Fell Lord, the Mantled One came forth in sooth.  In his clawed hand was raised the Great Fear, the darkness deeper than shadow, his sceptre and sword.  And its touch was Death, and the very air turned to poison whence It cleaved.  Strong heroes shuddered, and their boasts and resolve tore into silence in the fetid air like fabric rent between charging bulls.  But none would charge here.  None could speak.  Few could breathe.

“Yet the Lady stood, the golden, thunder-armed.  Awful was the grasping fear, but yet She stood.  In mighty array was Her raiment, in Her palm was strength, and in Her hand was the incarnation of pure light: Peace’s Friend, the Immortal Protector, the Rainbow Sword of the legends.  She was fury’s harbinger in lightning as She – She alone! – moved to face the Fell Lord, the Mantled One.  And that very lightning, with a screaming akin to the clangor of a thousand insane bells, ripped the poisoned air asunder as the blades clashed ...”

- from the Canticles of the Rose City, canto VII, The Last Battle Of The First War

It is a battlesword wrought of milky crystal, which shines with rainbow hues of innermost radiance when it catches any light.  No wire or wrappings mar the shaped glass-smooth hilt, nor gems or carvings its surface.  The invincible blade of the Time Before Time, the Rainbow Sword features in many of the legends and myths of the world.  The one who wields it in battle is invincible, and it has been long sought by scholars and warlords alike.

Now it’s been found.  Not by a goddess of rainbows, but by living mortals.  And the world will never be the same.

This is, if you will, a Kobayashi Maru-type find: something that tests the character and common sense of your party, and not a plot hook to be used lightly.

The Sword is part of the creation myth, the favored weapon of the Lady of Thunders, the goddess who defeated the great evil in the War of the Gods at the dawn of the world.  She renounced all violence after that hour, and famously left the Sword in the blooded dust of that fatal field.  There are legends of its reappearance thereafter, but they are generally disputed, and felt by many to be outright apocryphal.

It is a thing of elemental, divine power.  Don’t bother with stats for it; the Sword transcends such things.  Anyone it strikes in battle is instantly killed.  Anything it is used to smite is destroyed.  Hack a barrier with it, and the barrier is blown to pieces.  Chop at a two-century-old oak with it, and the tree is shattered into splinters with a hundred-foot cone of destruction.  It parries any attack, or any number of attackers.  Its wielder can’t be stunned, drained, affected by mind-control or direct damage magics, possessed, anything like that.

Other than that, we’re not talking Stormbringer here: it won’t corrupt you (except in so far as wielding an invincible blade of legend will go to a person’s head), the souls of its victims aren't consumed in horrible screaming, the Lady of Thunders doesn’t want it back, you’re not mystically bound to it, and there’s no Dark Being with a mirror-image version out there seeking a cataclysmic confrontation.  But:

* The literary influence to consider here isn’t Moorcock; it’s Saberhagen.  This is the sort of weapon over which wars are fought, or heavily influenced by its presence on one side or another. Its owner has a big red X on his or her back, from many sides.

* Never mind the ambitious monarchs, wizards or warlords who want it.  Gods will want it, either to use themselves, or to wrench out of mortal hands a weapon known to be a godslayer.  Sensible Powers-That-Be want to steal or disenchant it to keep anyone else from using it. The church of the Lady of Thunders (a pacifist faith these many thousands of years) finds its existence somewhat embarrassing, and its ownership by a mere mortal sacrilegious.  Uppity heroes will think they ought to be the one wielding it, or that the one who is doesn’t at all deserve it, and they’d like to test out this “invincible in battle” BS themselves.

* Read between the lines, and the weapon doesn’t make the wielder completely invulnerable.  He or she still has to sleep, eat, use the jakes, bathe, and do a lot of things that don’t involve holding the naked blade, which is the only time its powers work.  “Invincible in battle” doesn’t mean the wielder can’t be drowned, crushed in a landslide or roasted by a volcano.  (Also, I'm not enthusiastic about the wielder's chances solo against an artillery barrage or a crossbow regiment.)

* Further ... while the wielder’s stamina and weapon skills are significantly improved (however your system handles such things), they’re not limitless – a pudgy scholar neither turns into Conan nor can fight for tireless hours on end.  Apply common sense: wrapping the palsied hand of a 90-year-old invalid around the hilt doesn’t turn him into Conan either.

But given all that, the way to play the Sword is as a horrifically destructive force of nature.  Just plain drawing it exposes its bone-shaking aura, Fright Checks being appropriate.  Spar jokingly with it, and you’re going to find yourself cutting your sparring partner in half.  Poke someone just a half-inch deep with it, and he’ll scream as his organs all explode at once and that “half-inch deep” incision suddenly becomes large enough to put your fist into.  You really can knock down a castle tower with it, or at the least blow a hole in its side large enough to drive a wagon-and-four through.  Jam it point-first into the ground, and you’ll provoke an earthquake at least.  Drive the point home (without saying so explicitly) that this is something plainly not meant for mortals, the use of which involves perils beyond imagining.

Posted by Ravenswing at 1:34 AM

Ravenswing
Amherst, MA, United States
Hello there; I'm Bob Traynor. I've been gaming since the 70s, when me and my high school friends Laurey and Marilyn went on a whirlwind 10-hours-a-day-three-straight-days run through the wild and intense world of the Empire of the Petal Throne. Since then I've played RPGs; GMed RPGs; run tournaments; been a convention speaker; written for SJ Games, Iron Crown, Gamelords and Mayfair; designed a homebrew; playtested RPGs; moderated the gaming tracks at Worldcons ... this is one of the enduring things I've done in my life. Over the years, I've had some strong opinions. Read this blog, and you'll have some of them inflicted upon you.